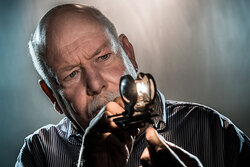 Born in 1938 in Breslau. Son of Hans Weigert, university professor for history of art, and Cornelie Weigert, painter.

Education:
Traditional ‚humanistic’ school. Latin and Ancient Greek.
Studies at Munich University, drama, psychology, German literature.
Dedo financed his studies by nightshift work in a factory and as a truck driver.
Worked in theaters as assistant director and actor.

Since 1963 – work as director of photography, mainly for NBC specials (1-hour films like the history of St. Petersburg, a day in Irkutsk, Siberia). Shot first western-made production on Russian Cosmonauts.

1963 – First own production, documentary about the history and the development of the Communist Party in Europe.

1965 – First work as DoP on feature film with Robert Taylor in Argentina. 150 5-minute commercials/infomercials for Shell Oil filmed in USA and Canada.
Documentaries as DoP, director and producer in over 40 countries, mainly for US Television.
Produced art films like Fra Angelico, Goya, Raffael.

1966 – Dedo exhibited at Photokina the first European-made fluid head, which, later on became a standard of the industry.

Educating many interns and assistants in the cinematographic art and practice, many of which turned into successful operators, DoPs, and film producers.

Still, at heart and soul, a man with a camera.

Founded in 1965 as a film production company. Developed into a film camera rental house. Supplying cameras and teams for local productions as well as for US television.

At times, Dedo Weigert Film supplied up to 22 crews for ABC sports events. Up to 12 crews for Formula One events.

During the 1972 Olympics in Munich, all cameras used by ABC Sports (which had exclusive television rights for the Olympics) came from DWF (Dedo Weigert Film). Established a technical service center in the Olympic Village.

Later on, DWF started to import and supply film technical accessories and cameras.

For many years, DWF regarded itself as the main house of high-speed film on the European continent with 16mm, 35mm and 70mm high-speed film cameras. Cameras and technicians were sent all over Europe, mainly for the shooting of commercials and special effects.

Acted as suppliers of Tiffen and Rosco filters.

In 1981 introduced the first high-speed video systems for industry and scientific work.

Today DWF is representing many of the top international brands, like Tiffen, Schneider and NiSi filters. Cooke and Schneider lenses.

Representing and renting the most powerful lighting fixtures (up to 100kW) from Luminys Systems.

Offering a wide range of equipment, designed and built for us under the Tecpro brand-name, like Fellonis, Lite Flex and many other top brands and products.

Also the first frequency-controlled zoom drive and a lightweight dolly, capable of crab and curve motion with variable track width.

Later on, this work flowed into the newly founded dedotec company.

Initially, a lot of the development work of Dedotec GmbH was dedicated to expand the usefulness of high-speed video systems, like a synchronized flash system, supplying special optics through fiber light guides for the scientific and machine vision control of microchip bonding "DEDOSTROBE".

Developing specialized wide-angle lenses for 70mm high-speed film cameras. Those lenses were declared as physically impossible by several optics professors. It took us six weeks to design, build and deliver all of those lenses "DEDOONE".

For the original research, dedicated to the German high-speed trains ICE, we built special modifications of the high-speed video systems, allowing the insertion of eight digital data channels into the video signal, and developed a multi-angled periscope system including zoom elements for the study of behavior of the locomotive’s pantograph.

We developed a one-eyed stereo system for the University of Heidelberg. Also a high-speed video fluoroscope for the early recognition of cancer cells.

Such varied and demanding R&D work was relatively lucrative and kept us busy. Quite late we decided to start designing and building equipment that we could keep, produce and sell. Thus, the dedolight range developed. 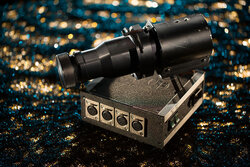 The special demands and concepts of our equipment, especially the lighting equipment did not allow us to follow any existing design concept.

These concepts were awarded twice by the Oscar Committee of the Academy of Motion Picture Arts & Sciences, and also with an Emmy and several other awards.

Because of the highly developed and unique optics of our lighting equipment we were able to build very special optical supplementary devices, like non-spherical wide-angle attachments, Imager/projection systems for which we also developed an absolutely exceptional range of high-transmission lenses, which cover an image circle, much larger than a Hasselblad format.

This, we regard as one of our optical breakthrough miracles, since the construction of such super high quality lenses for such a large format with incredible transmission is absolutely unique and equalled only by optical systems in a cost range multiple times higher.

All in all, we registered more than 30 international patents from film transport systems to optical devices, many of these patents also covering construction concepts and designs for our diverse lighting equipment and its accessories.

We are very proud of our capable and experienced R&D team, which, in today’s professional lighting industry may be one of the very best worldwide regarding mechanical, optical and electronic design.

We also conquered particular difficulties with discharge light sources: not difficult for traditional lighting concepts, but in conjunction with our highly developed optics it presented special challenges.

With our exceptional team we were able to transfer our concepts, knowledge and unusual approaches into the world of LED lights.

The transfer into the LED world demanded that we first had to find a common language with LED light source suppliers, because our demands are many times different and higher than usual.

For each of the light sources especially developed for us we had to design special non-spherical optics to collaborate with each of those light sources, in other words, each of our light fixtures has its own optical design, functioning with the particular light source used.

Apart from the highly developed optical achievements of our traditional lights and the transfer of such concepts into the LED world, we are also deeply involved in the construction and manufacturing of soft lights, and now also have entered the new world of reflected light systems.

From the very beginning we never tried to copy anything that already existed. Learning from our own work in production we determined what additional equipment was missing, and to find new and innovative ways for the lighting professional. Thus, we created a vast array of new and different equipment.

We listen to and live from the dialog with the working professionals, and we try to answer their requests. This has led to an incredible variety of different tools, making it sometimes difficult to wade through the multitude of products.

We have also added special directions, where we also excel in precision lighting instruments, not only for the film, video and photographic industry, but also for museums, where our special lights, even in ultraviolet and infrared applications serve the most demanding scientists in forensic, archeological and medical tasks.

Being far ahead in our development, we also conduct the dialog with people with extremely special demands and we try to satisfy their needs. So please keep this dialog going, it is our lifeline; and answering special requests, following ideas, even if at first they may sound ‚different’, you may always find good partners in our excellent team. 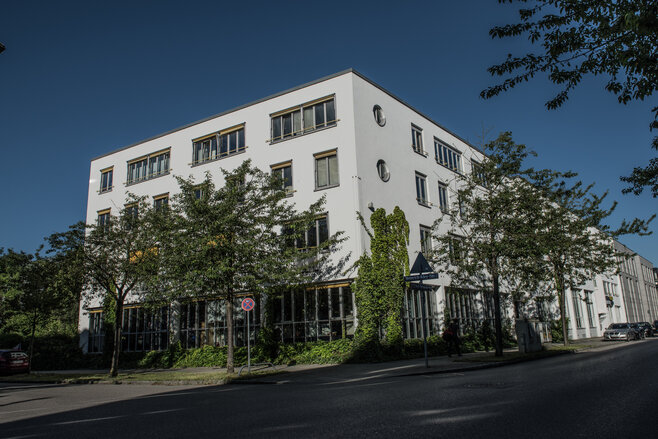 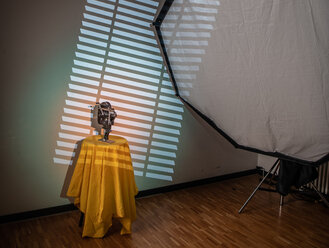 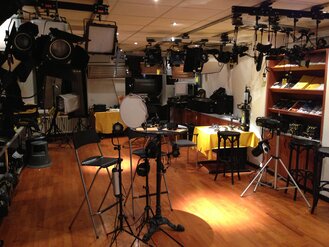 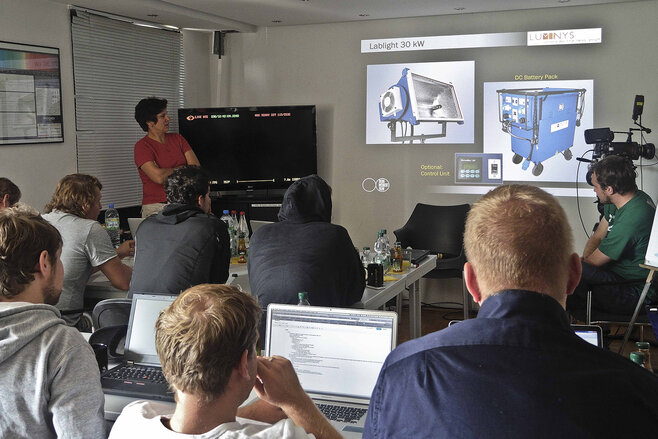 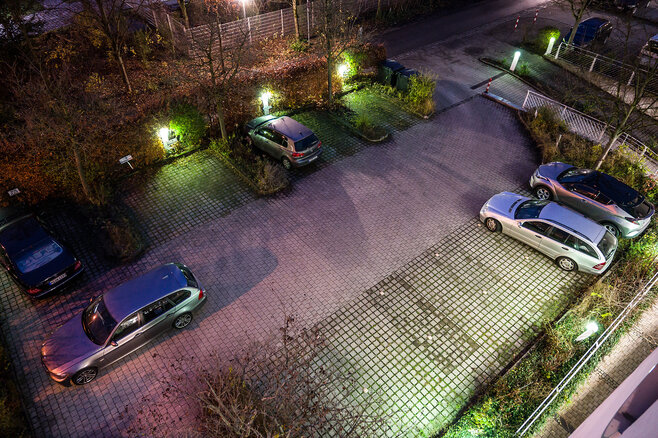 Parking is available at the back of the building

Located in the north of munich, our company can be easily reached from the end of the autobahn A9. 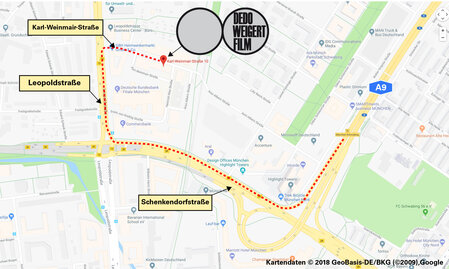 Also by public transport it is easy to get to us.
Please use the travel planner of the MVV to find the best possible rail link. 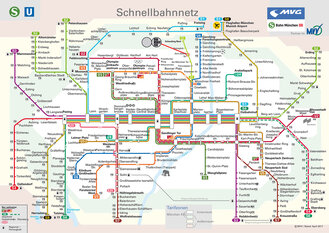 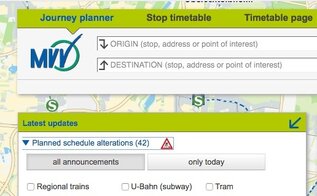