To find out more about the product, choose your personal assistant on our contact page.

Prices on this page

All these prices are “ex warehouse Munich”.

Valid for sales in Germany and Austria only.

All specifications and prices are subject to change without prior notification.

The New Kid on the Block (Well not a kid….) The New Ronford Atlas 50 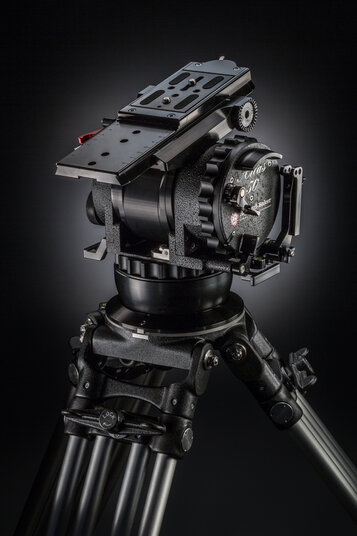 A year ago, I was thinking of updating my O’Connor 2575 ﬂuid head and while investigating the new and upgraded heads on the market, John Buckley (at Movietech), recommended trying a modified Ronford Atlas 40 fluid head he had, a prototype to the new Atlas 50.

At the time I was just starting a project in Wales and we agreed for me to have the head for a short period, to assess its capabilities. This initial assessment we thought was going to be a few days…. 6 months later and at the end of the job, I found myself returning the Head grudgingly; I am now awaiting with anticipation the final product “the new Atlas 50 Fluid Head”.

Ronford-Baker has been part of my professional life since the late 70’s. Over this period, I have worked with most models produced, from my early days on documentaries, then commercials and ﬁnally feature ﬁlms.

(I remember once trying to explain whilst working on a ﬁlm in the USA that those metal legs everybody liked so much, where actually produced at the back of a dairy just outside London, in what looked like a very big shed, no one believed my story, those were the days!)

Technically the Atlas 50 head can take any of the cameras in the market and is very easy to use.

Over the years their name and excellence in engineering has become a landmark in the world of Cinematography, and now their premises have become an engineer’s paradise.

Their history speaks for itself (using their own words):

“Ronford-Baker Engineering was formed in 1966 as collaboration between Ron Ford, who ran a camera rental business and Harry Baker, a talented engineer.

Initially set up as a maintenance facility for cameras and associated equipment, Ronford-Baker soon became known as a place to get ‘specials’ engineered for feature ﬁlms.  These ﬁlms included “The Clockwork Orange” and “James Bond”.

One such special request was for an adjustable tripod for the production of “Ryan’s Daughter”.  It needed to survive daily use submerged in the sea.

Our heavy-duty tripod was born!

This internationally patented, and Academy Award winning, telescopic 4 tube design developed into a full range now used in all aspects of the ﬁlm and television industry throughout the World.